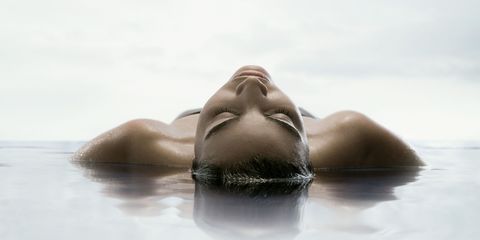 There’s beauty in the habitual activity of everyday life, but every now and then, I like to challenge myself to break away from routine and get out of my comfort zone. That’s why I’ve ridden, paralyzed with fear, in hot air balloons, become a solo global traveler, planned a New Year’s Eve trip to an ice hotel in Oslo and why I signed up to close myself in a dark room and float in a shallow pool filled with water and half a ton of Epsom salt, better known as a sensory deprivation tank.

The 60-or-90-minute experience, offered at Lift/Next Level Floats in Brooklyn, is more than just a slightly spooky, new age way to get some peace and quiet: There are a host of benefits for the body—the high levels of magnesium in the Epsom salt help ease muscle, joint and lower back pain, increase circulation and lower blood pressure—as well as the mind. “The main benefits I receive are total relaxation of the mind, body and nervous system, enhanced creativity, idea generation and problem-solving and recovery from jet lag,” says Be Well Health Coach Jenny Sansouci, a frequent float tank user (along with, ahem, the New England Patriots—the team had a float tank installed in their training room at the start of the 2014-2015 seasons).

When I showed up at Lift, I was led to the spacious room housing the tank and instructed to shower before getting in. Once clean, I slithered into the egg-shaped tank (about the size of a college dorm bed, you can move around without bumping the walls, but it’s not big enough for two) and began my worthwhile journey. Here, five reasons to give floating in the dark a shot.

1) It’s an experience that’s both new and familiar. None of us can remember what it’s like to be in the womb, but I have to imagine rocking in the warm water of the tank in silence (there’s calming music should you choose to play it) is as close to being back there as it gets. Not only was I incredibly soothed, I felt a bit like a pre-cog from Minority Report, which is something I’ve never been able to say before. And don’t worry, if you suffer from claustrophobia, you can leave the lid partially open.

2) We could all use a break from screens. Doing two hours of anything with complete disconnection from social media seemed feasible (I do sleep after all), but I found myself counting down the minutes in my head at the beginning of my session. Once I started slipping deeper and deeper into relaxation, I became unaware of time, and began to confront the highs and lows of the past year and channel positive energy toward what’s to come—it was a spiritual and mental detox. Before I knew it, a kind voice was overhead, notifying me that it was time to get out. The lack of real-world contact is encouraged even after you’ve exited the tank; cozy couches and a cup of hot tea allow you to unwind and bring yourself back to reality as slowly as you’d like.

3) You’ll feel pain relief in areas you didn’t even know you had pain in. It only took a few minutes of floating for my shoulders, legs and lower back—the areas where I experience the most tension regularly—to become tight. But by the end of the session, the constriction was almost nonexistent and I felt even better and less stiff the day after.

4) Your skin and hair will thank you. Outside of a Soul-Cycle class or a sauna session, this is the best sweat you’ll get; at 98.6° F, there were moments when I felt too warm and had to release the lid a bit for some relief. The slippery salt works wonders on your skin and hair: There’s no need for exfoliation or a shower after the session—you feel as if you’ve essentially been scrubbed squeaky-clean, but with no harshness (and my skin is quite sensitive). It’s important to keep in mind that you should drink a lot of water and have a light snack beforehand. As with working out, you will feel quite thirsty and ready for a meal once you’re done.

5) You’ll have the best sleep of your life afterward. I could’ve fallen asleep on the floor of the spa with the snap of fingers had I been allowed, but instead, I fell asleep the instant I hit my mattress and slept almost two hours past my usual wake-up time the next morning (I’m a chronic early bird) and felt completely restored and rejuvenated the entire next day.

Any cookies that may not be particularly necessary for the website to function and is used specifically to collect user personal data via analytics, ads, other embedded contents are termed as non-necessary cookies. It is mandatory to procure user consent prior to running these cookies on your website.